Never too young to start

With the UK marking National Volunteers’ Week from 1st-7th June, 14-year old Esther Tucker is proving that you are never too young to start volunteering as she completes a full year as a volunteer synchronised swimming coach for Kirklees Active Leisure (KAL).

The Huddersfield teenager has been coaching young swimmers, aged from 8-13 years, every week at the Aqua Fun Sessions held at Holmfirth pool.

These Aqua Fun sessions act as a pathway into the main Borough of Kirklees (BOK) Synchronised Swimming Club, where Esther has been a member since the age of seven, and are delivered by BOK’s head coach, Jade Wyke.

Esther initially started volunteering to help complete her Duke of Edinburgh Award, but enjoyed it so much she decided to carry on as part of the coaching team.

“Originally I was just going to do it for the 3 months needed to count towards my Bronze Award," said Esther, "but I really enjoyed helping to teach the swimmers the basic figures that you first have to learn in synchro and putting them together in a routine.

I also liked showing them some of the different exercises that can help build up their core strength, which is really needed for synchronised swimming."

Coach Jade Wyke said: “Esther is a great help at the weekly sessions and is very popular with the young swimmers. They appreciate that she is always willing to get in the water with them and demonstrate how to complete each set of figures correctly, as well as joining in with their routines. The fact that Esther is nearer their age, and a synchronised swimmer herself, has meant the girls have really warmed to her and respond well to her coaching."

The KAL volunteering programme is currently managed by Lead Activator, Michael Wilkins, who introduced the initiative to help bring younger swimmers into the sport.

Michael said: “It is always a good idea to bring in some fresh ideas and help with the pathway through to the clubs. The role of the KAL volunteer is to have input into this by assisting with the delivery of the lessons and providing the support required.

This can be hugely rewarding for the volunteer as it provides an opportunity for them to learn new skills; such as communication, leadership and teaching skills, as well as building confidence. For some though, the reward is simply the joy and satisfaction gained from helping others and ‘giving something back’ to their sport." 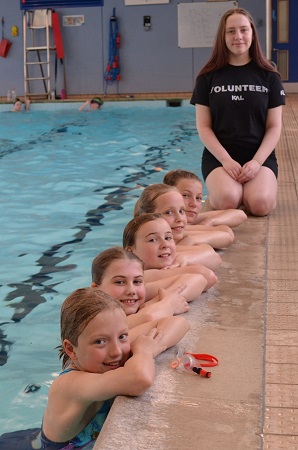